Solar Payback supports the gathering of cost data of industrial solar heat projects with the aim of adding solar heat into the Renewable Power Generation Costs Report of the International Renewable Energy Agency IRENA in June 2021. The latest edition of this flagship report created a great deal of interest, worldwide. More than 2,000 stakeholders registered for the webinar on 9 June in which Michael Taylor from IRENA explained the key takeaways from their latest report (recording of the webinar online). So far the publication includes total installed costs, performance data, technology trends and the Levelised Cost of Energy (LCOE) only for renewable electricity technologies (wind, PV, CSP, geothermal etc). To fill the gap on solar thermal, solrico – one of the Solar Payback partners – has started a cooperation with IRENA with the aim of adding cost data and analysis of solar thermal heat projects in IRENA’s cost report next year.

With the report IRENA aims at improving the transparency of up-to-date cost data around renewable energy technologies to enable its member states and other stakeholder groups to make informed decisions based on the most current trends and facts available today. You can find the report and data for download from the IRENA publications page.

“At IRENA we have invested a significant amount of resources over the last years to develop a very comprehensive database of renewable electricity technologies with more than 18,000 projects. Each data set includes the year of installation, the size, the total investment costs including installation, the annual full load hours and the calculated LCOE”, explained Taylor in the webinar. “Although larger renewable heat projects are already cost competitive in many cases, the lack of up-to-date and transparent data for this sector mean this fact is not well-known by politicians and investors. That´s why we are partnering with key industry stakeholders to broaden the cost database to include renewable heat technologies, such as solar heat and heat pump projects.”

Solar heat cost data gathering has started
“We believe that the solar thermal industry would strongly improve its credibility as a mature and trustworthy technology, if it formed part of this annual IRENA report”, says Jan Knaack, Project Coordinator of Solar Payback at the German industry association BSW Solar. For the data gathering solrico reached out to around 30 of the most important solar heat project developers or technology suppliers worldwide and to funding agencies in Europe with the goal of gathering robust project cost data for several hundred solar heat projects that have been commissioned in the last 10 years. This unique dataset will allow the first meaningful analysis of project-level solar heat costs by IRENA by the end of this year, ready for inclusion in next year’s cost report. The work on the survey is funded by Solar Payback, four and a half year project that aims at increasing the deployment of solar heat industrial projects (SHIP) plants in Mexico, Brazil, South Africa and India. Companies interested in supporting the data gathering can contact Bärbel Epp for more information:
epp@solrico.com.

Learn from low-cost best practise countries
Transparent cost data is crucial to creating the broad support necessary for bold policy action. In the power generation sector, Taylor’s key takeaway from this year’s report was that costs are continuing to fall, particularly for solar and wind power technologies. The LCOE of solar PV fell by 13 % in 2019 and LCOE of wind by 9 %.

Cost reductions for solar and wind electricity are being driven by improved technology, economies of scale, more competitive supply chains and developer experience. The factors differ by technology and country. “Obviously it is interesting on a global level to see the trends in technology costs, but in reality the costs are very different on the country level. So what we try to do is to extract these insights to inform our member states of what is driving cost reductions and what we can learn from low-cost best practise examples in other countries,” explained Taylor. 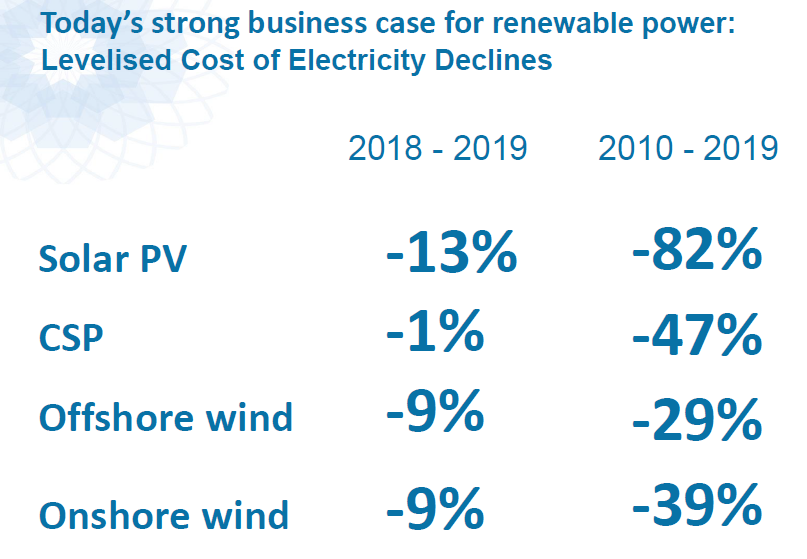 Decline of levelized cost of renewable electricity in the period 2018-2019 and 2010-2019
Source: Renewable Power Generation Costs in 2019 Report

The LCOE modelling approach
IRENA has chosen LCOE analyses as a standardised methodology that can be applied to a wide range of technologies in different countries and regions. LCOE values are mainly depending on three factors: The level of the investment, the annual renewable electricity yield and the discount rate. The latter is fixed by IRENA at 7.5 % (real) for all projects in OECD countries as well as China and at 10 % (real) for the rest of the world (OECD stands for Organisation for Economic Cooperation and Development). Consequently, the two first factors – investment costs and yield – account for the LCOE values and trends, although IRENA is working on a survey to collect project-level financing costs that can be used in future cost reports.

The following combination of charts show the remarkable decline in LCOE for utility-scale PV plants from 0.38 to 0.07 USD/kWh (82 % decline) between 2010 and 2019 (right chart) as a combination of heavily reduced investment costs (left side) and slightly increased capacity factor (chart in the middle). 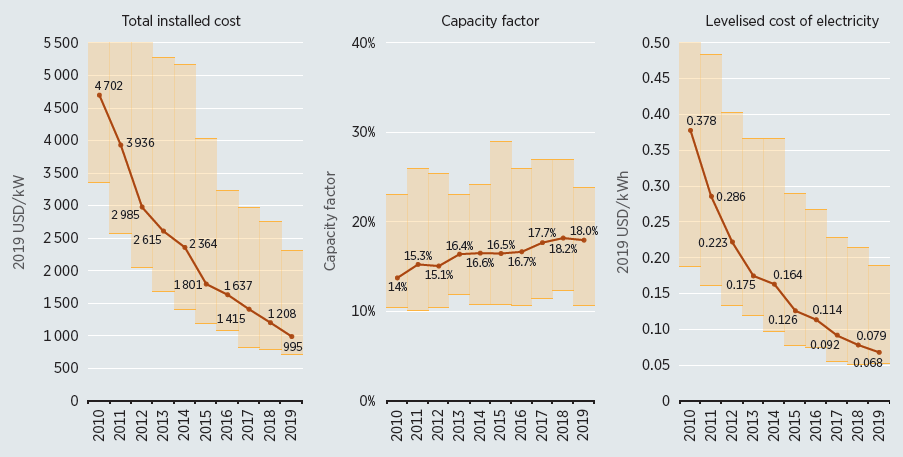 The annual yield of the electricity plant is described as the capacity factor (or sometimes as the load factor), that is the ratio between the project’s actual generation output during a year and what a PV generator would generate if it was running 100% of the time at maximum output. The capacity factor depends on the technology choice and the irradiation on site. According to Taylor, the increase of the capacity factor for utility-scale solar PV over time is not so much a technology story, as it is one of greater deployment in areas with better solar resources.

In contrast to PV, the same chart group for concentrating solar power (CSP) looks rather different. Very low deployment rates with only a hand full of projects commissioned annually result in highly volatile total installed costs (left chart below). However, the capacity factor (in the middle) has increased from 30 % in 2010 to 45 % in 2019 because of better technology, shift to higher DNI areas and larger storage volumes. “A key driver of lower electricity costs from CSP has been the shift of deployment to locations outside Spain which are, on average, sunnier”, concluded Taylor. Spain was the dominating market for CSP between 2010 and 2012. 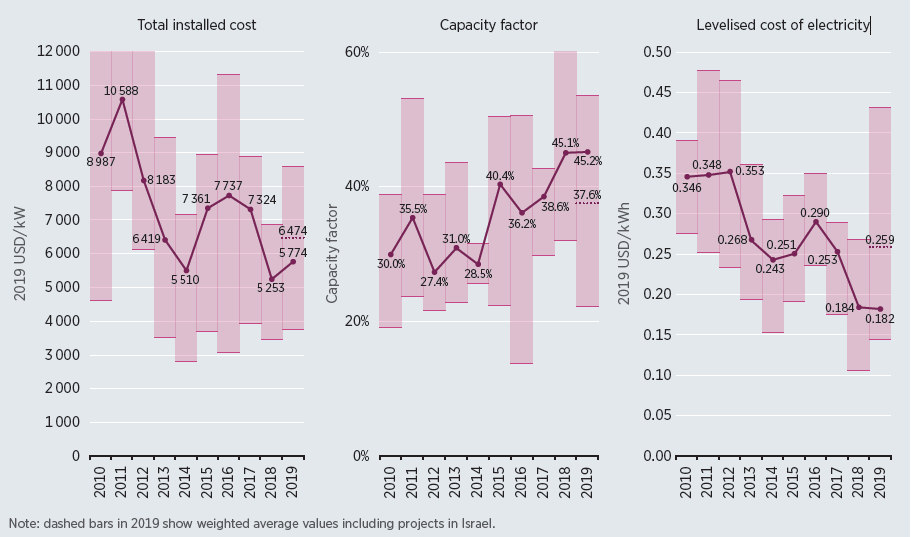 A perfect opportunity for knowledge exchange on SHIP 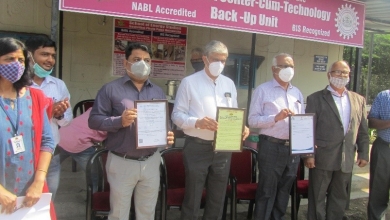 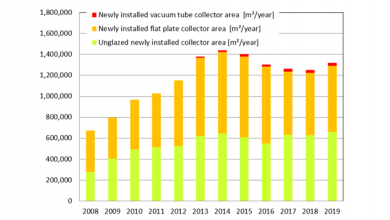